Menu
Get a free consultation

How is hair transplantation and are the steps in detail

How is hair transplantation and are the steps in detail:
what 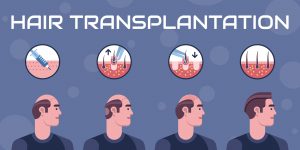 Step 1: Hair Transplantatio:
In the beginning, a complete blood image of the patient is to be analyzed and examined. Its scientific name is CBC. It is also called “differential”. This procedure is a blood smear, hemoglobin, yamatocrit, number of red blood cells, number of differential blood cells , Number of WCB white blood cells, retina.
CBC is performed for blood cell counts and includes a comprehensive examination to check the patient’s health and the absence of any disease.
After this procedure, the patient is diagnosed with certain diseases that do not appear in this analysis or not; he also works to know the patient’s condition after performing an operation or taking some medications that may affect the blood cells mentioned above.

The most prominent results of the analysis of the full blood image before hair transplantation are the following:

• Check the discipline of blood clotting speed (clotting).The negative result for HIV is HIV / AIDS.
• The result of blood analysis of hepatitis should be negative.
• Ensure that blood counts are normal.
If the result of previous diseases is negative and the other percentages are normal and healthy then the process of hair transplant can be safely and without any problems.
Step 2: Draw the hair line and identify it in the first scalp (front) before starting hair transplantation:
Before the beginning of the operation, the areas where hair transplantation will be performed, especially in the front line, should be identified. This is one of the important steps and steps, and by drawing the line after the patient is asked to move his eyebrows so that the doctor can observe the line And because it is better to draw it closer to the triangle, and this gives the patient appropriate expression movements after the last results of the stages Healing process, and the circular shape will give a beautiful appearance To the front and move badly from emotions and others.
At this stage, the patient can participate and express his opinion in the form of the line and what he wishes to have in the future. And there are also many standards and measurements on which to draw the line and most notably the compatibility with the anatomy of the skull and the muscles in the front, and is usually taken measurements to adhere to the golden rule that says that there are three ratios in the face and should be equal Distances that spaces will equalize will get the patient in the form of hair and natural front and beautiful,

Step 4: Shave the head before the operation:

The head must be shaved before the hair transplant process should be a specific length, and it is important to pay attention to the cleanliness of the materials and blades used in the process of shaving and sterilization very well.
Step 5: Identify the donor area:
After the hair is cut and removed from the donor area and the anatomical examination is carried out, the next stage is determined by drawing. The number of follicles that will be removed by the extraction method is determined from the healthy and ideal roots that are suitable for planting.

When the procedure is complete, the patient is ready to undergo hair transplantation. Before starting, it is anesthetized topically with about 60% of the lidocaine drug, plus about 40% of the marquine drug. Target the nerve endings and then the patient will never be able to feel the scalp, the ratio of anesthetic sufficient for this procedure is 2.5 mm.

And after anesthesia also:

The doctor works to lift the scalp by using an appropriate medical fluid of 5, 0 Adrenaline. This fluid helps to narrow the arteries and reduce bleeding during the operation. On the other hand, it helps to protect the skeleton of the skull from any damage or problems caused by agriculture. Tools used.
After these procedures, the following stages and the work of the doctor will vary according to each patient and his / her condition, which can be classified between holes in the scalp (the channels where the follicles are taken by extraction). Wide baldness.
If the patient suffers from small areas of baldness, then open the cracks in the scalp at the beginning and then the doctor draws a number of baits with the roots from the beginning of the cracks to the last.

Step 7: Pick the bulbs from the donor area:

In this process, the surgeon uses a device called Micrometer. This device includes heads of several different sizes. The measurements of these headers are between (0) and (0,9) mm. They can be used according to the nature of hair roots , If thick, or curly, or finely, and require these procedures very precise and literal and this is supposed to rely on a skilled surgeon.

At this stage, a machine called SLITS is used to make cracks for the channels of the bulbs that will be planted later.
It is important that the doctor uses it with extreme care and accuracy so that there is no harm to the tissues or scars remain after the operation. This depends on the amount of recourse to a skilled doctor with extensive experience. In this area.
And then the surgeon opens the cracks (channels) that will be planted with the bulbs extracted here and another side must be careful and accuracy in it, it is very important that the doctor follow the direction of the growth of the original hair and then the cultivation of those seedlings extracted in order to obtain The results are distinctive and similar to the hair perfectly so as not to be separated from the original hair.
Final Step 9: Hair follicle phase
This is the final stage in which the process of implantation of bulbs, and requires the accuracy and skill of the high by all medical staff and must not be less than the experience in this area for at least two years.
If the bulbs are taken and planted in the designated place where the cracks were made, and the good work here and taking into account all the minute details by the doctor and his medical staff will inevitably lead to the results of the distinctive and reached the patient to the foe.

1. The hair follicle should be implanted at the top of the scalp.
2. The two-pronged bulb is implanted in the middle of the scalp, and this is due to the nature of the patient’s baldness.
3. For the three-bristle hair follicle, it is best to be implanted in the back in the areas between the hair and the original hair on both ends of the scalp. In some cases it is not possible to implant the follicles that have two or three hairs in the scalp It is important to work on the selection of good roots suitable for planting.
When these basic criteria are taken into consideration in the process of agriculture and others, the patient must get very good results.

There are ways and methods to be followed to get the desired results and not to cause the failure of the process, and we will explain in the following in detail how should be the process of washing the hair:

1. In the beginning, care must be taken to use a medical lotion in order to moisten the areas and scars that are formed in the area where the cracks are closed, as well as for the different areas where the cultivation process took place.
2. On the day after hair transplantation, the scalp should be placed on the scalp and maintained for at least half an hour. The head is then washed with water, gently and very lightly so that the newly planted bulbs are not affected.
3. During the 10 days following the operation, the scalp must be re-washed daily, in order to remove the formed crusts as well as to remove the existing redness and remove it gradually, and the patient can do this wash himself.
4. After the first ten days of the hair transplant process, the lotion should be applied to the places where it was grown, to help moisturize the dehydration that may occur naturally in the area of ​​surgery and the crusts that can be formed.
And leave the lotion for about 45 minutes, and then wash the patient to his hair using lukewarm water and the process of washing slowly and gently without massage the cultivated areas so as not to be affected by modern bulbs, in this regard the doctor give the patient tips and The necessary instructions for washing the hair which he must adhere to in detail.
6. When the washing process is constantly followed and in the right way, often after the washing is repeated for five times, the peel will disappear from the areas that have been gradually cultivated. After about one week of the patient repeating the washing process carefully, no crusts will remain in the scalp. Head and reddish.
7. After washing, do not dry the water in any way, but you must use thick tissue paper and put it on the head and leave it to dry the water without touching it.
In the final usually describes the doctor some medicines for the patient and that he must adhere to them after the process of hair transplant, and the most prominent of these

• The doctor requires his patient to take aspirin, which contributes to increase the blood flow and facilitate the flow to the places of agriculture and operation, which causes rapid healing of wounds and nutrition of newly planted seedlings.
• It is possible for the doctor to prescribe for his patient some of the painkillers and drugs, notably antibiotics and many other drugs that may be needed.
• Immediately after completion of the operation, the patient should take one dose of the dwelling immediately after the food and in the manner prescribed by the doctor, while the next day the patient should take this dwelling twice the first morning and the other in the evening.
• Antibiotics: It is taken in the same way as the house where one dose on the first day of the operation after food, and on the second day twice, such as the first morning and the second evening.