Is the process of inserting the sperm directly into the cytoplasm of the egg is an effective method, and uses only one sperm and not as in the process of the children of the tubes that put tens of thousands of sperm next to the egg and are thus injected egg after the removal of cells adjacent to the egg and these The method is ideal and currently preferred and this method is considered an evolution because in this way it is possible to vaccination even with the use of very few sperm.

This process involves the use of special instruments and an inverted microscope so that the laboratory technician can withdraw the sperm using a special injection needle, which is inserted carefully through the membrane of the egg and then injected sperm into the inner part of the egg (cytoplasm), then fertilization occurs in 75 – 85% of sperm fertilized with sperm.

The reasons for resorting to micro-injections:

Method of action of micro-injections: 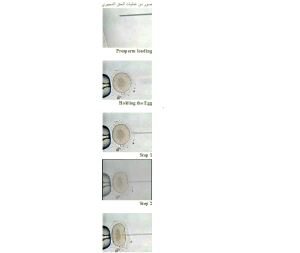 Methods of obtaining sperm that are used in micro-injections:

The beneficiary of this method is usually who complains of one of the following problems:

* The presence of severe infections such as tuberculosis, which is concentrated in the genital area, or other venereal diseases that block the ducts of sperm that can not be treated surgically.

If the sperm is accidentally cut, for example, when a specific surgery is performed, and attempts to repair it are unsuccessful.

This method is accomplished by the withdrawal of sperm from the beginning of the epidermal contact of the epididymis, the area where the sperm have been newly produced and has the most effective in movement and the ability to fertilize and then the procedure is performed microscopy of the egg as mentioned earlier.

* Extract sperm from the testes and microscopic injection of the egg

These methods are used to extract sperm from the testis directly either by TESE or by TESA and then used for microbial injection as mentioned above and used in the following cases:

– The absence of sperm in the epididymis.

– Blockage of the epididymis or lack thereof.

– Blockage or lack of semen channels.